How do regulator rectifiers work?

A regulator rectifier works as an analogue to digital converter. By combining a voltage regulator, with a bridge rectifier. The bridge rectifier converts the incoming AC stator voltage into a DC ripple. Stopping the voltage from going negative.

This creates a power source that is suitable for the battery and other electrical parts.

What is a Bridge Rectifier?

Originally patented in 1896 by Polish electro-technician Karol Pollak. The bridge rectifier has been an essential part of AC to DC conversion for over a century.

In technical talk, it’s purpose is to provide the same output polarity for either input polarity.

The animation opposite shows how this is achieved with 4 simple diodes. A diode is an electronic device that only allows current to flow in one direction. And so, you can think of them as a one-way valve for electrons. 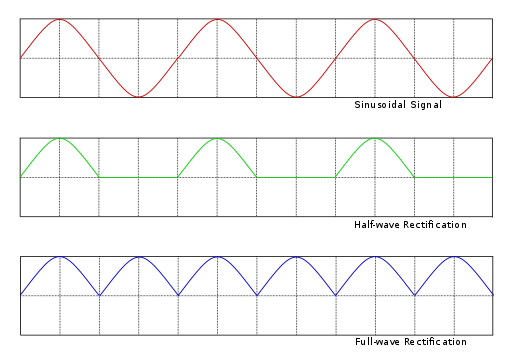 The pulsing on the DC output is known as DC ripple. This can be seen by plotting the DC ripples against time on a graph:

The Red graph shows the AC current coming from the motorcycle stator. Nothing really to see here – just an AC waveform.

The Green graph shows the effect of half wave rectification. This is what happens when you put AC through a single diode. This is not to be confused with the bridge rectifier example given above.

With half wave rectification, the negative side of the AC wave is simply chopped off. Consequently, half wave regulator rectifiers have a much lower potential power output than full wave versions.

Finally, the Blue graph shows full wave rectification. The effects of a full wave bridge rectifier. Rather than being ‘chopped off’, it can be shown that the negative side of the waveform has been inverted.

DC Ripple Smoothing with a Capacitor

This section will cover how capacitors are used to smooth the DC ripple output of the rectifier. Plus, what effect half wave rectifiers have on this smoothing process.

The Red line of the graph shows the charging and discharging of a capacitor.

As the voltage increase then the capacitor charges up.

As the voltage decreases, then the capacitor slowly discharges its energy. this prevents the voltage from falling back to zero as quickly as the supply. Hence the smoothed ripple effect.

The output voltage no longer matches the original DC ripple. This smoothing out effect has been caused by the capacitor. Which makes it much easier to regulate a constant DC voltage.

The Disadvantages of Half Wave Rectifiers

Half wave rectifiers have a dramatic effect on potential power output of a regulator rectifier. By take out every other rectified ripple there are fewer positive cycles to charge the capacitor.

This means that the capacitor needs to hold on its potential charge for much longer periods.

Half of the available energy from the stator isn’t being utilised. Consequently, half wave rectifiers are considered wasteful. Always proving to be less powerful and less efficient than their full wave rectifier counterparts.

How Does a Voltage Regulator Work?

This is where it gets somewhat complicated. Without a solid understanding of electronic engineering, it can be difficult to grasp the details. So, let’s keep it simple and look at the fundamental concept.

This is achieved through a feedback loop. The regulator continuously monitors its own output voltage. This is either done internally or with an external voltage sensing wire (Vsense).

Store too much energy and it may blow the device. Store too little and there might not be enough power to meet demand. To keep up, the regulator varies the power being sent to the capacitor constantly. This is analogue control at its best!

Most voltage regulator’s come in the form of a small solid-state device. They monitor their own output voltage. If it climbs too high, they will dump any excess input power to ground. This excess energy is dissipated as heat. Therefore, motorcycle regulator rectifiers are sold inside a large alloy heat sink.

Also, this method of feedback control is also very effective for protecting against over voltages and surges. If the voltage suddenly climbs sky high, the regulator will detect the increase and limit the amount of energy flowing to the capacitor. When the energy flow is restricted enough the device, simply turns off.